The lake is 100% capped with 7-20 inches of safe ice. There are some big pressure ridges with sketchy ice and some open water running from Goose island east. The fishing has been good for trout in the 2-3 lbs range with reports of 6-7 lbs fish being caught! Kastmasters, trout magnets, laser jigs, pk spoons, and a variety of other baits are consistently producing trout. Pike are also on the prowl taking frozen suckers, smelt, and water dogs under tip ups or on big white tube jigs tipped with sucker. There have also been numerous reports of perch being caught as they move in toward the shore lines to spawn. The Colorado Classic Ice Masters tournament drew quite a crowd this weekend! First place had a total of 7 pounds 5 ounces and the team that won also took big fish with a 4 pounds 8 ounce rainbow. Congrats!

Eleven Mile has iced up a little more since last week, but there are still areas of open water to watch for. Fishing is still very good for trout 1-4 lbs on all the baits and jigs mentioned on the last report. Pike action is fair, with a lot of big fish being spotted and a few big fish being caught. Water dogs, sucks, smelt, and big tube jigs are your best bet for a pike. A few salmon are starting to show up as well. There were only 6 or 7 weighed in at the tournament this last weekend, but part of that is due to ice conditions. Cold temperatures should continue to improve all ice conditions around the lake! This 39.5″ 17 lbs pike was landed in the first leg of the 11 mile Colorado Classic Grand Slam ice fishing tournament! 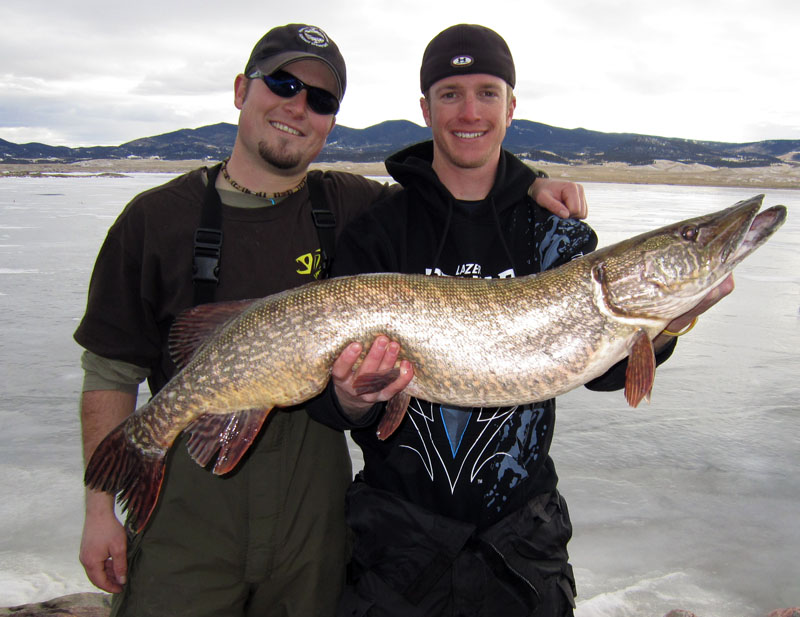 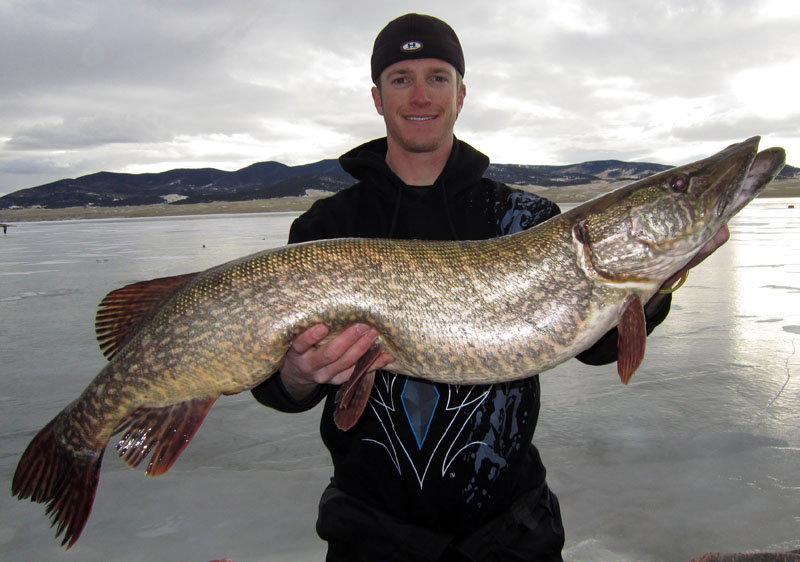 Eleven Mile has plenty of safe ice ranging from 6-12 inches, but there are still areas of open water near Cross Creek, Sucker Cove, west of Stoll Mountain, in front of and around Witchers, and a big section of open water from Goose Island to the North Shore marina area that extends eastward. Fishing was good yesterday with a lot of 2-3 pound fish cruising the usualy trout haunts. Didn’t have any time to take pictures because the action was good! Greens, olives, pinks, and oranges working well on lazer jigs, sweedish pimples, and small ice jigs tipped with a meal worm. If you aren’t seeing fish, move! Good luck to everyone in the upcoming tournament this saturday!

The lake has opened up again. There is some safe ice at sucker cove, stoll mountain, lazy boy, rocking chair, rocky flats, coyote ridge, and witchers, but there are pressure ridges and open water in most all of these areas so beware! There is a big section of open water from howbert point to the north shore marina. Fishing is fair to good on the ice that is safe with your typical ice jigs and spoons tipped with a meal or wax worm. Be safe and good luck!

Eleven Mile is mostly capped, but it will still need at least few days before the ice is safe. Safe ice can be found in Witchers cove, Cross Creek, and Sucker Cove. There is still a pressure ridge in front of parts of cross creek and sucker cove so be careful! Fishing has been fair to good for trout on Kastmasters, rat finkys, shrimpos, tube jigs, and sweedish pimples all tipped with meal worms or wax worms.

The warm weather we have experienced has opened parts of 11 Mile back up prolonging the much awaited ice fishing season!

As of 11-29-2010 11 Mile has capped with 1-2″ of clear black ice. Night time temperatures are well below freezing so this ice should continue to grow and we could see safe ice by this weekend! Stay tuned for more!