Here you can find current ice fishing reports and ice conditions for 11 Mile reservoir near Lake George, Colorado.  You can also find past reports by choosing the year you would like on the navigation bar to the left.   We cover ice conditions, fishing activity, weather, and areas to be careful of.  These fishing reports are compiled first hand by our fishing experiences and trips on Eleven Mile.  We update these reports every time we go out or hear new, relevant information from reliable sources.  Eleven Mile typically gets its first safe ice around mid to late December depending on the year.  It is usually late December to early January before the entire lake has safe, fishable ice.  For live, on the water fishing reports and pictures, follow us on Facebook and Twitter!

Plenty of safe ice stretches across 11 Mile.  Eleven Mile has been getting a lot of pressure this year as ice fishing  popularity grows across the state!  Because of this, the fish have seen A LOT of jigs and take a little more coaxing at times to see consistent results.  Think small, natural, and light line.  More live bait presentations can improve your success as well.  The important part of the puzzle is paying attention to how the fish react to your bait.  If you get denied by 3 or more fish, it’s time to try something new!  A lot of the trout have been flying in, taking a quick bite at the lure and then moving on.  Be quick on the hook set to take advantage of these opportunities!

The Kokanee salmon fishing has been surprisingly good this 2013 ice fishing season!  These fish have been hanging in 15-40′ of water over the deeper channel areas.  Pk spoons, smaller lazer jigs, kastmasters, and crippled herring have been working.  Change your colors often if you are seeing fish and not getting bit.  Your jigging action is very improtant as well.  Some days they like aggresive jigs, other days short, little jigs works better.EXPERIMENT!

The northern pike fishing has been fair to good, but per usual, every day is different.  A live water dog or some type of dead bait (suckers, anchovies, etc; the fresher the better) uner a tip up has been the best producer.  Try to cover several different depths and structure types to narrow down where the most active fish are! 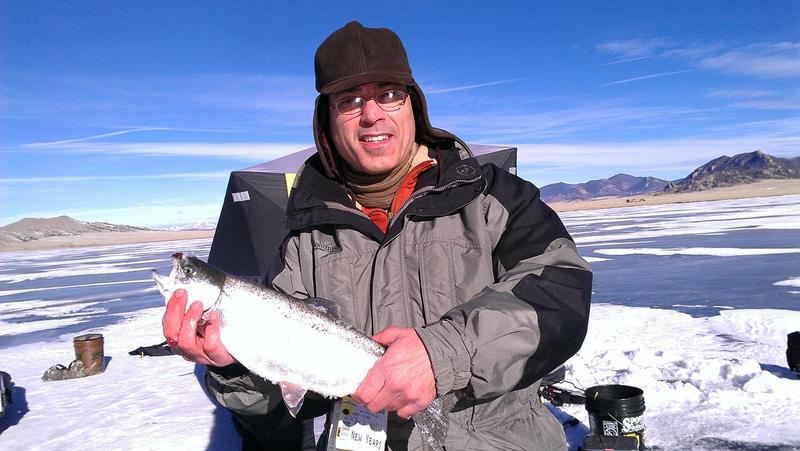 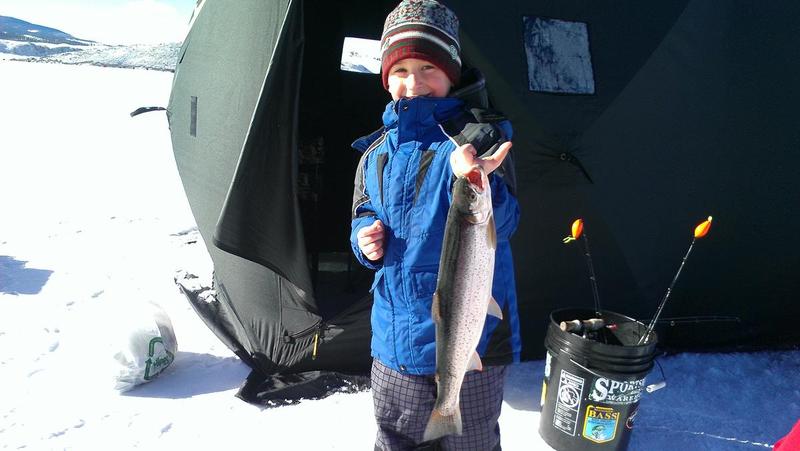 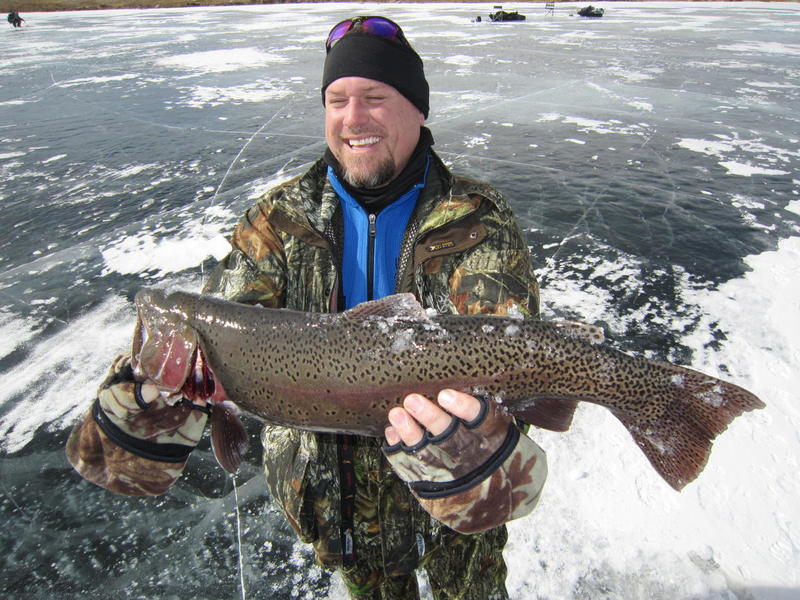 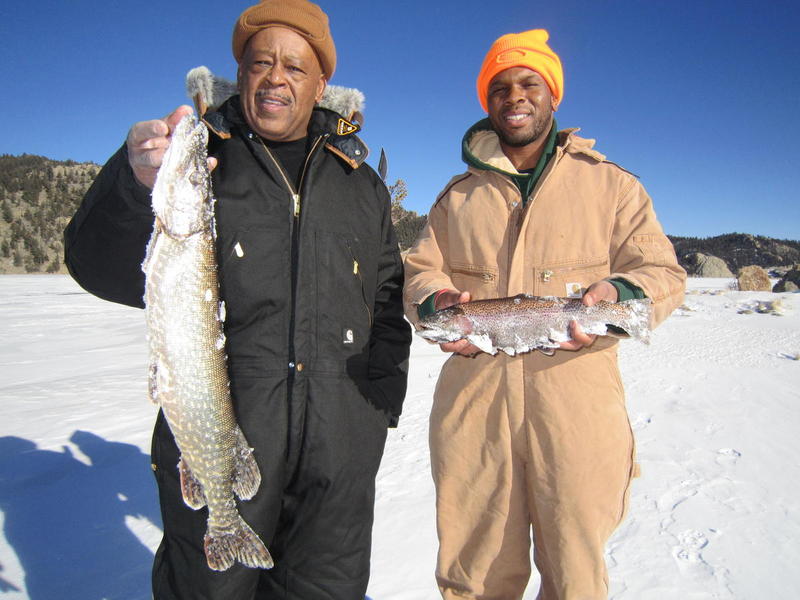 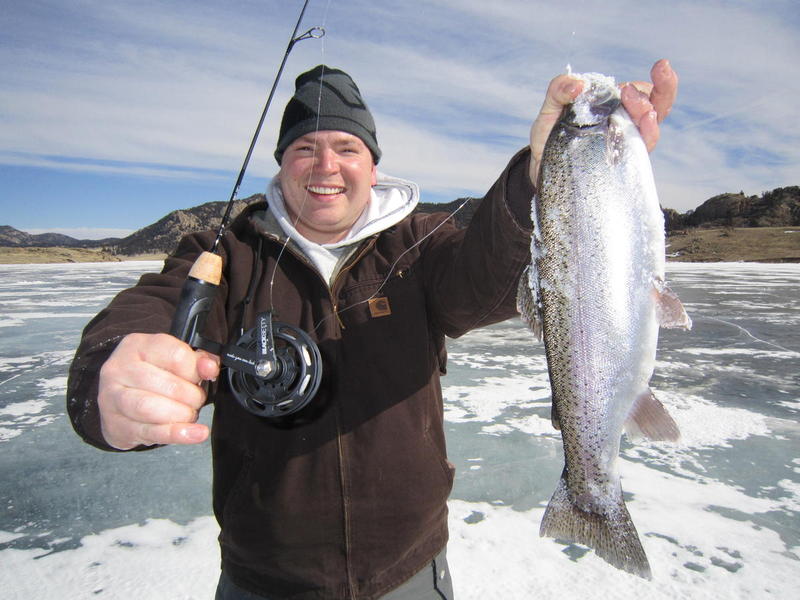 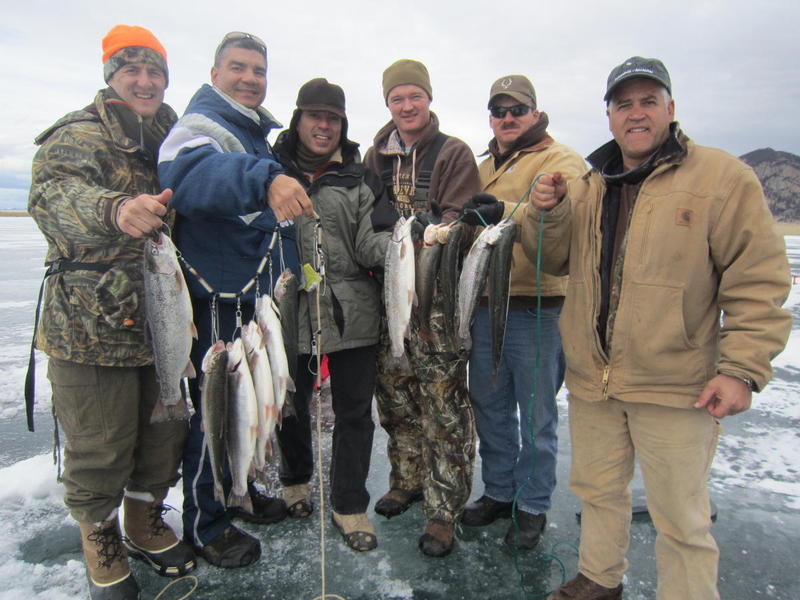 The  Eleven Mile has 12″+ across the entire lake for safe ice fishing!  The tournament last Saturday yielded some beautiful 7-10 lbs trophy trout!  The best action has been at Cross Creek, but the Eastern half of the lake has been putting out more big fish.  Reds, pinks, whites, and oranges have been good early and then the bite seems to be better on more natural colors.  Some nice pike have been caught on tip ups on weed edges and rocky points with water dogs and suckers.  The kokanee fishing has also been surprisingly good if you can find the fish!  Several limits were caught last Saturday as well.  Kokanee are hitting pink and white pk spoons, kastmasters, and lazer jigs. 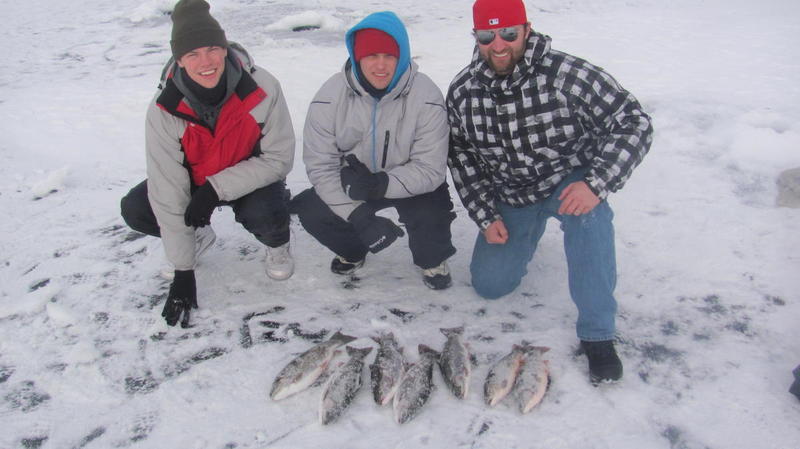 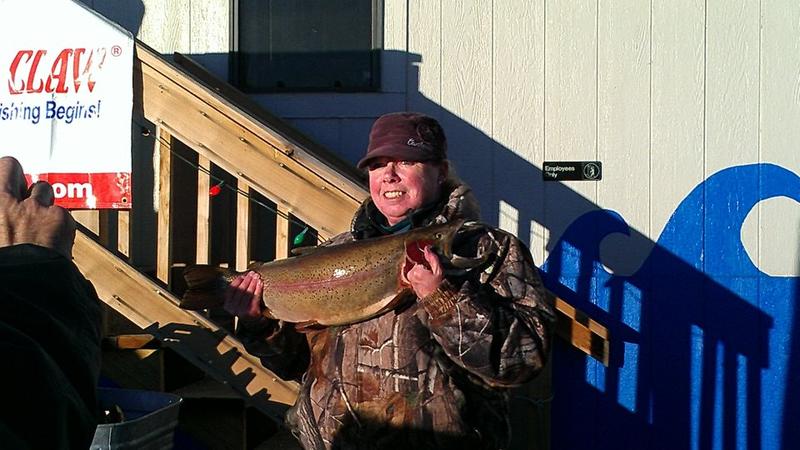 The entire lake has 4-7″ of good hard black ice with patches of snow across the lake!  Fishing has been good to excellent most days with A LOT of 17-19″ fish being caught and several fish in the 8+ lbs range being caught!  Eleven Mile is a put and take fishery meaning that it is stocked with rainbows every year to replenish the fish that are caught out of it every year.  Despite this replenishing, I would like to strongly encourage anybody that catches a fish over 5lbs to consider releasing it, especially a fish approaching the double digits!  If enough of these bigger fish are released, you will see some GIANT (15+ lbs) trout come out in the next couple of years!!  Fish are biting a variety of baits with pink, pink & white, green, and orange yielding the best results lately.  Small tube jigs, paddle bugs, lazer jigs, rat finkies, dynamic hd ice, pk spoons, kastmasters, and any bait similar to these have been producing.  Cross Creek and Sucker cove have been good, but also getting a lot of pressure.  We have been fishing 8-18 feet of water and been finding good numbers of fish! Take advantage of this early ice bite as it is one of the best bites of the year! 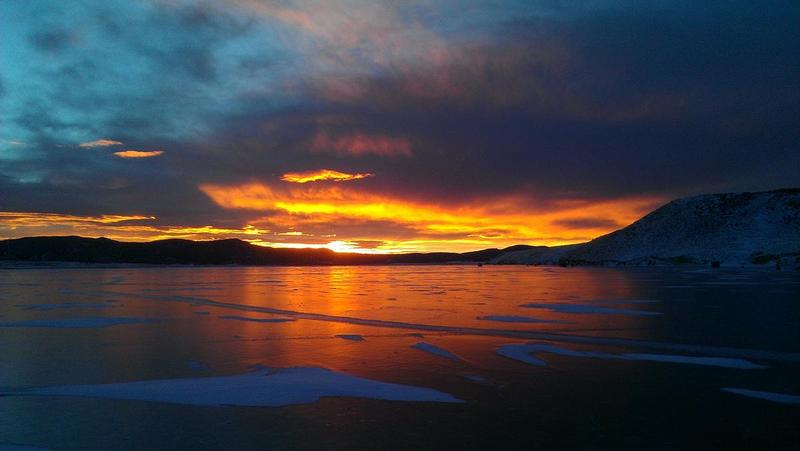 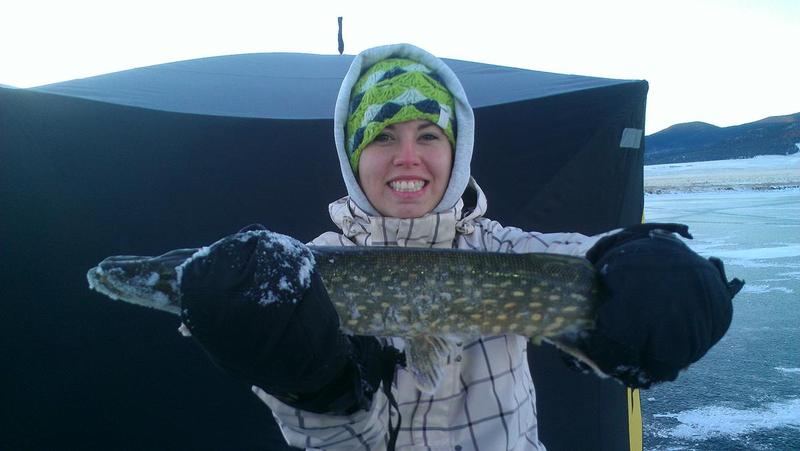 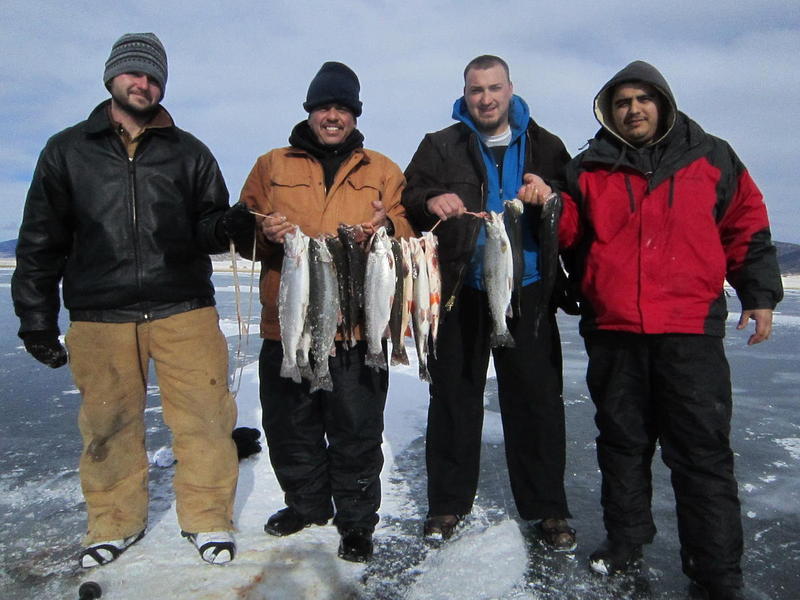 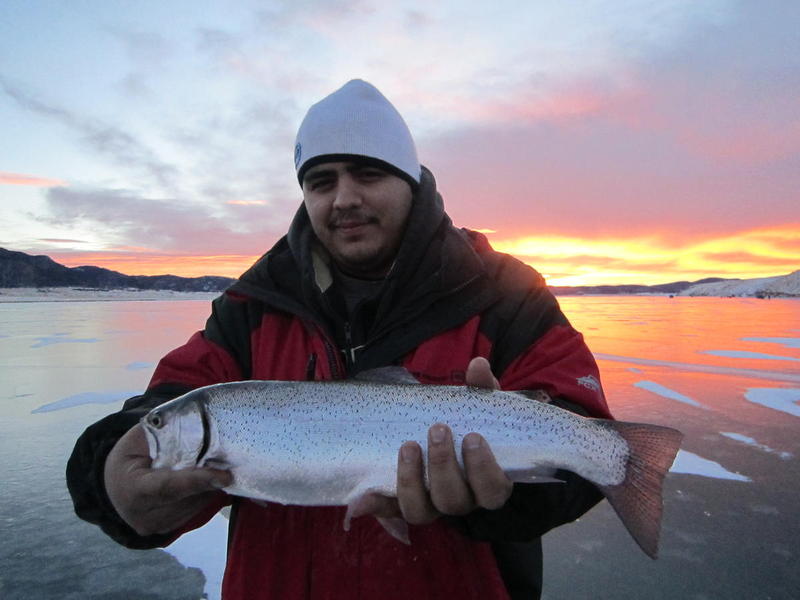 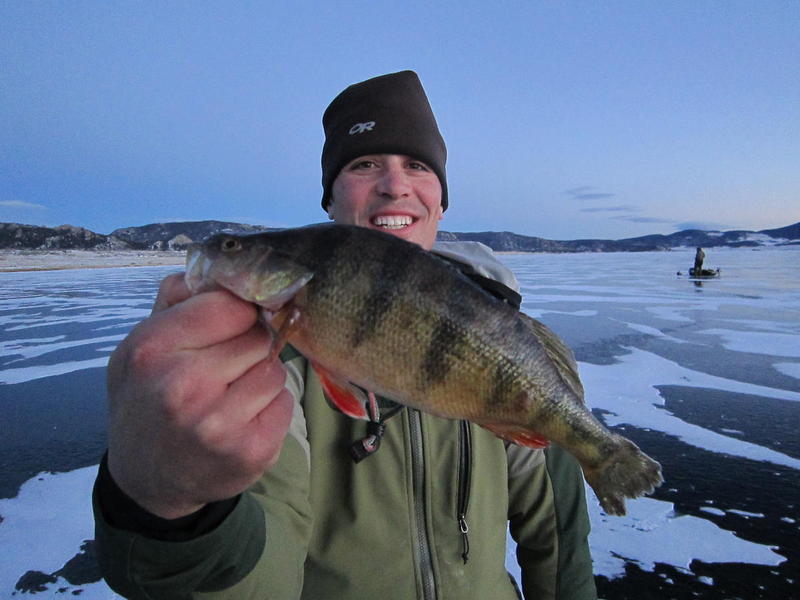