Despite the cold temperatures, Dan, Angela ventured from Breckenridge to meet me out on the lake. We met around 11 in an attempt to avoid the incredibly cold temperatures. Angela had never ice fished before, but she definitely could have fooled me! Angela landed the first several quality fish and then Dan jumped on the board with several of his own. We had a great mid-day feeding frenzy for the first hour and a half of our day! Once the sun came out in full force, the fish were a lot more cautious and would take one swipe at our offerings and then leave. Overall, God blessed us with an incredibly fun day of fellowship and fishing! The ice is running 12-14 inches in most areas and there is 1-6 inches of snow blanketing the lake. Fish are moving and feeding hard during the low light periods and will hit almost anything. Make sure you sweeten your offering with a meal or wax worm. If you are not seeing action, MOVE until you do!

Carlee and Rick of California joined me today for their first ever on ice experience and they had a blast! The weather started off beautiful, but the fishing was slow. As the day progressed, the weather got cold and the fishing heated up! We caught several good quality trout including a healthy brown and left them biting around two o clock! Reds, greens, pinks, and whites all had their shining moments! 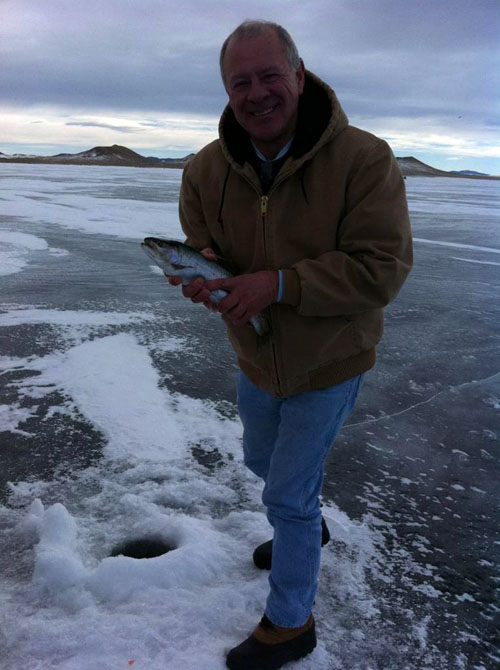 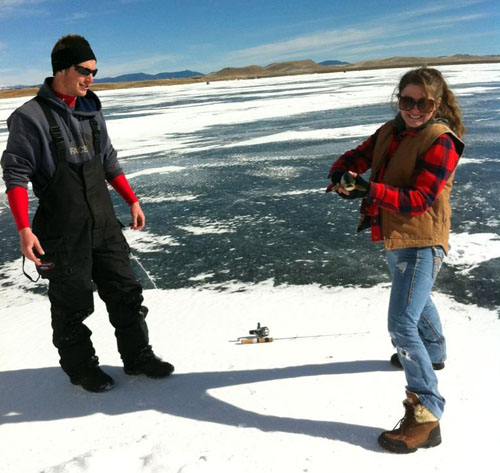 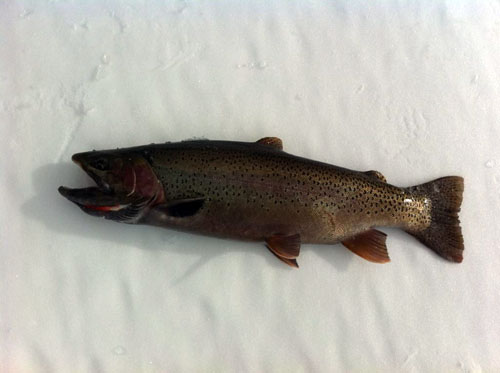 Les and Jeff joined me for some post-tournament ice fishing today and the bite was definitely tougher than the last three days, but we worked hard and found what we were looking for! The morning started off calm with another beautiful sunrise, but turned windy with the on-coming storm pusing in. Les and Jeff had never ice fished before, but caught on quickly despite a lite bite and made quick work of several nice antero rainbow and cutbow trout. Most of the fish went back to swim another day, but these guys kept a few for me to fillet so they could enjoy a nice trout dinner! Good job guys! 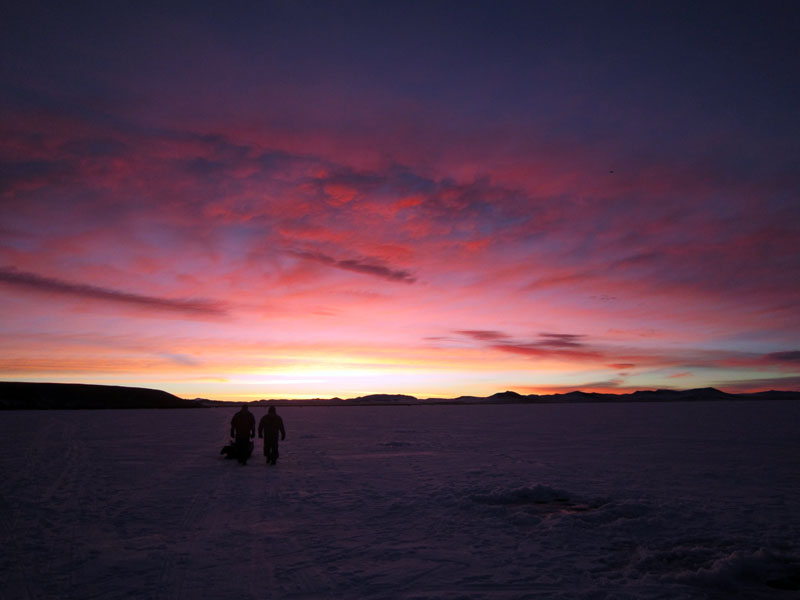 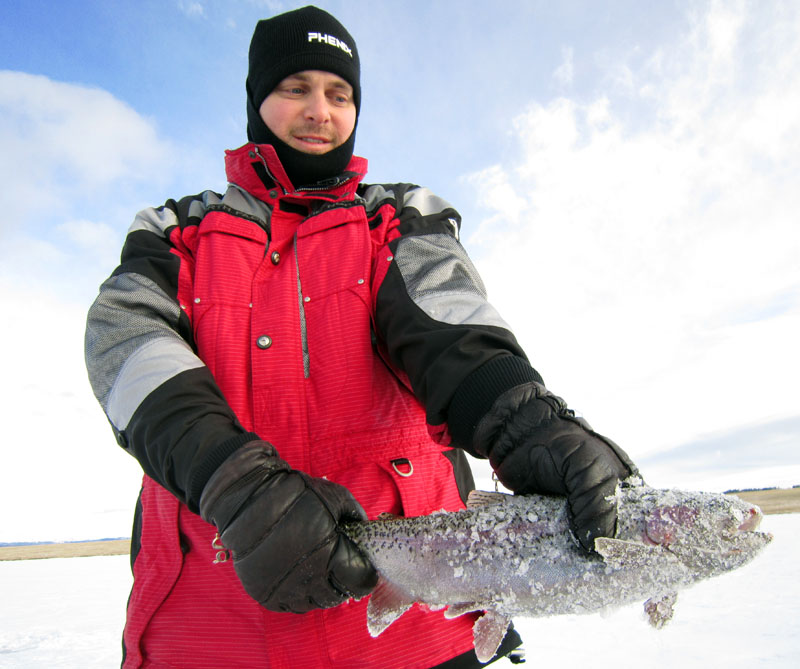 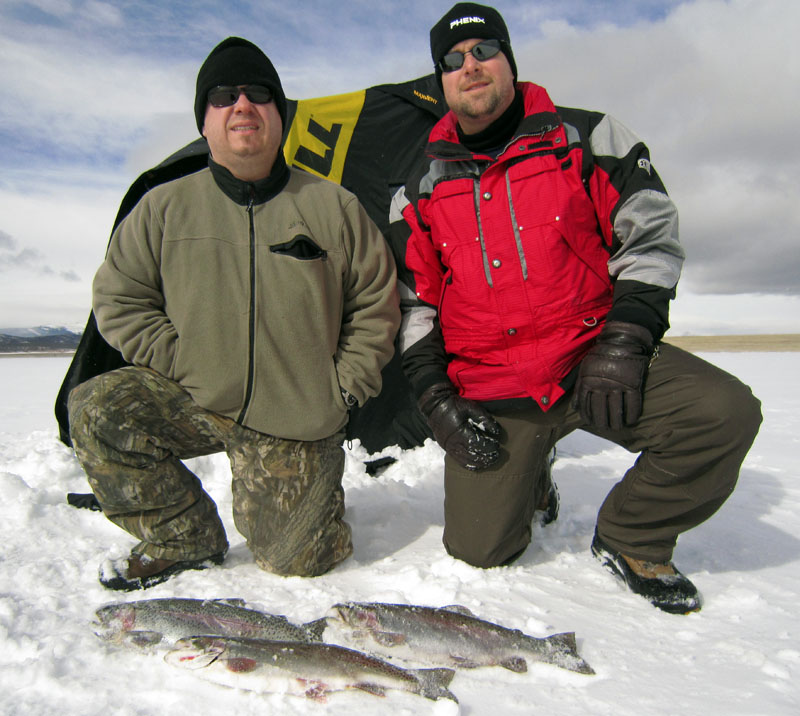 Spent three days of Colorado ice fishing on antero and had great action! The fish were on the prowl and I had no problem landing 15-30 fish a day while checking out several different areas. The action was hot for the first hour and a half to two hours of light and then there was another great bite around twelve thirty or one o clock. The fish were hitting all of the usual baits with pink being hot in the morning and green really coming on in the afternoon. On thursday I landed several fish over the 4 lbs mark with a couple of them having fat girths that were reminiscent of the last few years. This ice fishing year has been a little different than the last few, with plenty of fish to be had, but the better quality 5lbs + sized fish are a lot harder to come by than they used to be. The Bob Taylor Memorial fishing tournament was a good testiment to that with a fish over 7 lbs winning it last year and two fish over 6 lbs coming in just behind it. This year a 4 lbs 8 oz fish took first prize with several fish coming in at 4 lbs 4.5 oz. There are still some true Antero pigs out there, just not as many as there used to be. Sport Fish Colorado is all about preserving trophy fish of any species to give others the opportunity to enjoy a trophy fish experience. Catch and release on all trophy sized fish is the key to this formula being successful so if you are blessed enough to hook a trophy fish in the great state of Colorado, consider letting it go to be caught another day. If you would like to mount it for the memories, there are several great taxidermists in this state who can do an excellent replica mount for you! During this fishing bender, God blessed us with several incredible sunrises!!! 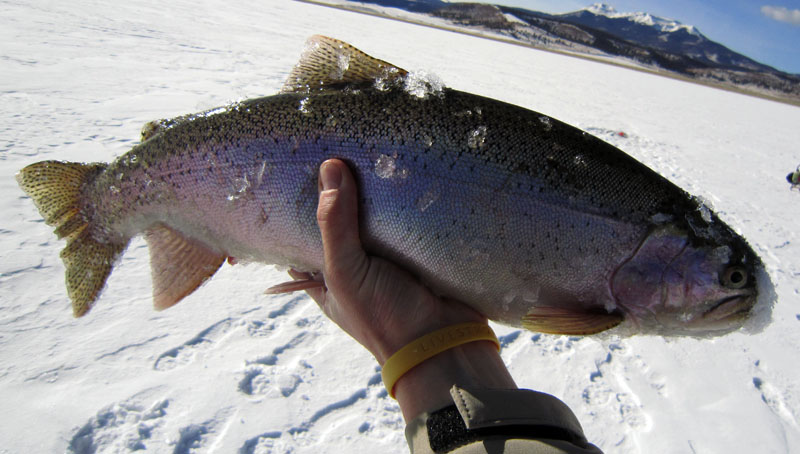 Fished through the snow storm today and the action was decent at times. As usual with this Antero ice fishing year consistently getting into fish takes a little more work than it used to, but it usually pays off. There are fish highways and other areas that I would consider the dead sea. Your job is to find those highways and avoid the dead areas in order to consistently see the results you long for. If you can do this and cycle through a few lure presentations, success will be eminent! Don’t get comfy in that warm hut, be ready to hunt the fish down! 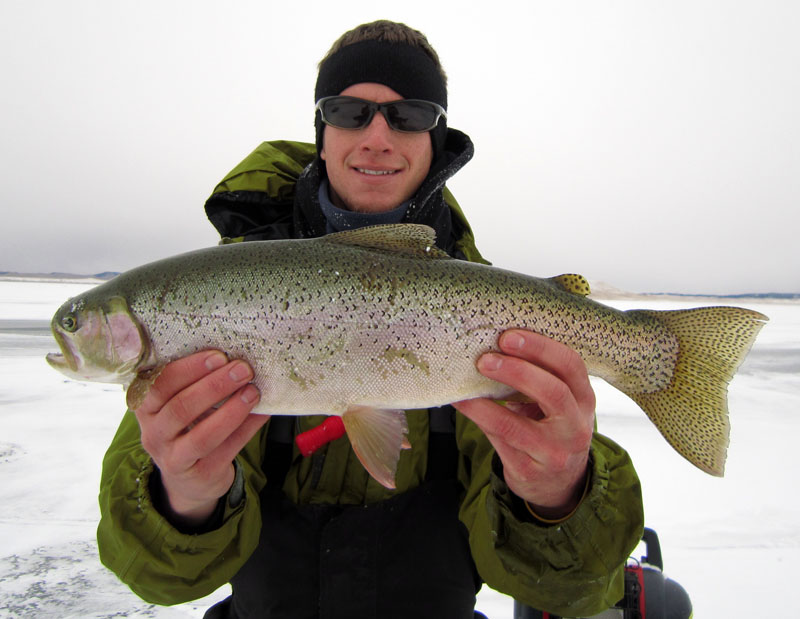 Had a group of 5 out today and the fishing started off hot! Worked a large area that has been productive and the fish were moving through hard until 11 when the action simply died. Plenty of fish landed plenty of fish missed and a good time had by all!

Put some time on the ice with Dj today and the fishing was great! Over sixty fish landed with consistent action all day! There is now a thin layer of snow on the ice helping to minimize the shadows that could potentially spook fish. Kastmasters, lazer jigs, tubes, and sweedish pimples will all produce fish. Tip them with a meal worm or wax worm.

Warm temperatures and wind have opened up more of the lake. There are several areas of open water in the middle towards the main inlet. The pressure ridge near the green lake area (pictured below) has opened up very wide and runs as far west as the eye can see. Be CAREFUL! There are still open water areas near both boat ramps as well. Fishing seems to be hot and cold. This year has definitely been slower than years past, but good fishing can still be found, although it’s not always easy. I have been trying to put a consistent quality fish pattern together and every time I think I am on to something, the next day is different. Hopefully this cold snap will help button the lake up and possibly put some snow on the ice. Just remember,fish of all sizes are still there to be caught and most of all have FUN fishing!!!

Today we had the pleasure of fishing with Marty Riddle of Eagle Claw! The focus was on trophy trout in Antero. This type of fishing requires a lot of patience and focus. We worked hard all day and were fortunate enough to get some quality fish! Thanks for coming up Marty it was great fishing with you! Antero still has areas of open unsafe water near the north shore boat ramp and green lake areas! Be very careful around these areas. The ice still has no snow on it and is very clear and slippery. Make sure you have ice cleats, life picks, 50-100′ of rope and a life vest to be safe. The fishing can be good if you are stealthy in your presentation and persistent. The fish are very finicky when the sun is out due to the clear ice. Try to fish on top of white or milky colored ice if you can find it in the area you are fishing to cut down on shadows. Fish are hitting all typical ice fishing jigs in pink, green, red, and orange tipped with a meal or wax worm. If you are not seeing fish, MOVE! Kokanee can be found almost anywhere around the lake cruising shallow along the shore lines and there are still some schools moving through the south shore boat ramp bay. These salmon can be caught on kastmasters, sweedish pimples, tube jigs, and just about anything else that is flashy and annoys them. Fish On!

Antero still has safe ice, but there are areas that have opened up and become dangerous as a result of the warm weather and wind we have been seeing. Straight out in front of the North Shore Boat Ramp is a section of broken ice and open water that wraps around the jetty. There is also another large pressure ridge that has open water near the Green Lake area. Be very careful in both of these areas! The ice has no snow on it and is very clear and slippery. Make sure you have ice cleats, life picks, 50-100′ of rope and a life vest to be safe. The fishing can be good if you are stealthy in your presentation. The fish are very finicky when the sun is out due to the clear ice. Try to fish on top of white or milky colored ice if you can find it in the area you are fishing to cut down on shadows. Fish are hitting all typical ice fishing jigs in pink, green, red, and orange tipped with a meal or wax worm. Kokanee can be found almost anywhere around the lake cruising shallow along the shore lines and there is a large school of salmon holding right at the south shore boat ramp. These salmon can be caught on kastmasters, sweedish pimples, tube jigs, and just about anything else that is flashy and annoys them.

Antero now has 4-6 inches of safe ice in most areas of the lake. There are a few small areas of open water near rock shorelines and freshwater springs as well as pressure ridges forming daily so be cautious and wear your life spikes! It was doesn’t hurt to have 30-50′ of rope and a life vest with you to avoid early ice accidents. The fishing is fair to good for all trout species and kokanee salmon as well. Between three guys in our party, we landed 50 fish. If you want kokanee fish right next to the south shore boat ramp in 2-8 feet of water on kastmasters and brite colored tube and ice jigs tipped with a meal or wax worm. Trout can be found in 2-16 feet of water with more numbers found in 6-16 feet of water. Trout are taking a wide variety of baits including tube jigs, shimpos, teardrop jigs, kastmasters, sweedish pimples, and much more in several colors. Greens, pinks, oranges, and a combination of these colors with white seem to work best depending upon the lure. If you aren’t getting bit, change your presentation! Tip all of these lures with a meal or wax worm. Remember to always be courteous and get out there and ICE FISH COLORADO!!!