Here you can find current ice fishing reports and ice conditions for Antero reservoir near Breckenridge, Fairplay, and Hartsel, Colorado.  You can also find past Colorado Ice fishing reports by choosing the year you would like on the navigation bar to the left.   We cover Antero ice conditions, fishing activity, weather, and areas to be careful of.  These fishing reports are compiled first hand by our fishing experiences and trips on Antero.  We update these Ice fishing reports every time we go out or hear new, relevant information from reliable sources.  Antero typically gets its first safe ice around mid to late November depending on the year.  It is usually mid December before the entire lake has safe, fishable ice.  For live, on the water ice fishing reports and pictures, follow us on Facebook and Twitter!

Austin and Rachel met me early at Antero to try their first ice fishing experience!  The action started off hot and then slowed, which proved to be a consistent pattern throughout the day.  The fish were a little picky once the sun came up, but once we found out what they wanted we had a lot of opportunities and caught plenty of fish!  We also spent some time watching and recording the fish below us on the underwater cam.  The video below has some very cool underwater footage!

When young Logan stepped out of the truck, introduced himself and immediately asked how long I had been guiding, I knew this kid was serious!  Logan and his cousin Emma along with their dads and grandpa joined me for an ice fishing adventure on Antero.  I showed everyone what we were doing and immediately they started catching fish!  Emma and Logan picked up everything we were doing in order to catch fish exceptionally well and as a result we caught a bunch of fish!  Good job everyone!  The water has really cleared up all around the lake, which makes for some exciting site fishing!  The snow on the ice has melted and crusted nicely so that towing a sled is easy.  Cleats are suggested for the slick spots.  Fishing was good on trout magnets, crappie tubes, and other small shrimp imitations. 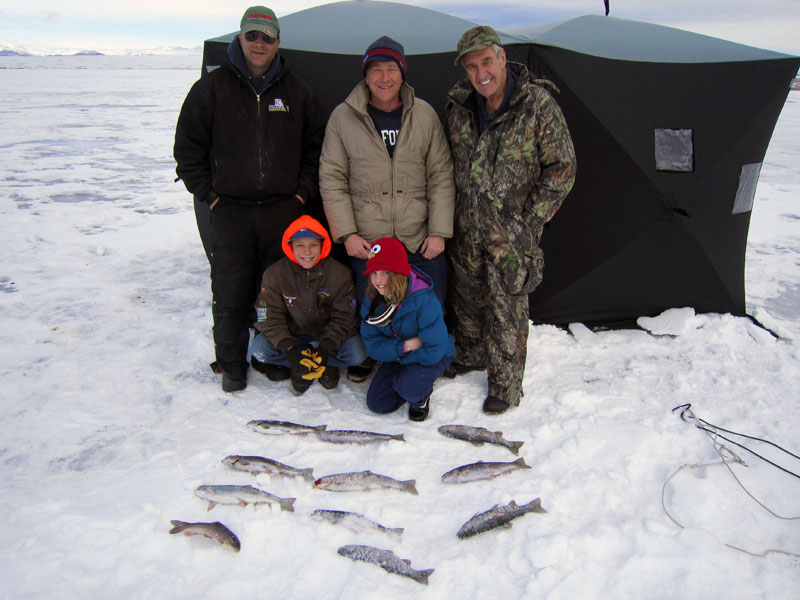 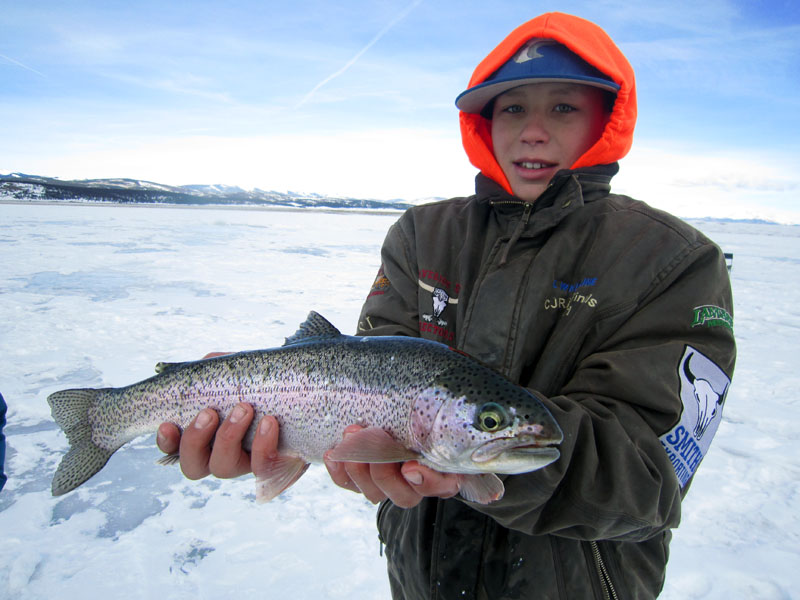 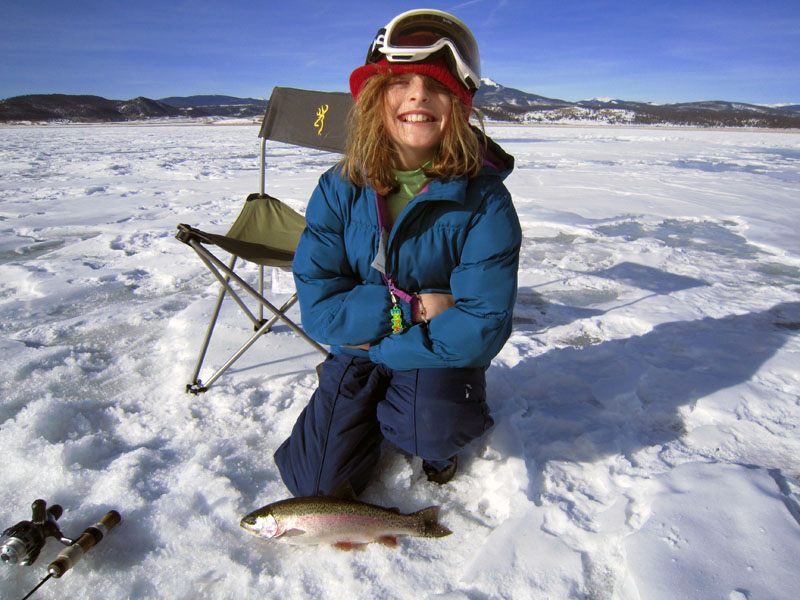 Antero has been fishing better just like 11 mile, with fish more willing to hit most well presented baits!  I also have a first hand report from a friend who said his buddy landed a beautiful 24 inch male cutbow and saw several others.  Today’s tournament should be interesting as far as the size of fish that come in.  Hopefully, we see one bigger than last year!

Antero’s has 8-12 inches thick with 4–6 inches of crusty snow on top of the ice.  There are also some patches of slush showing up.  Fishing has been fair to excellent depending on the day with fish acting a little moody on some days lately.  Cycle through your presentations on the tougher days because there usually is a bait that will out perform the rest of your baits! 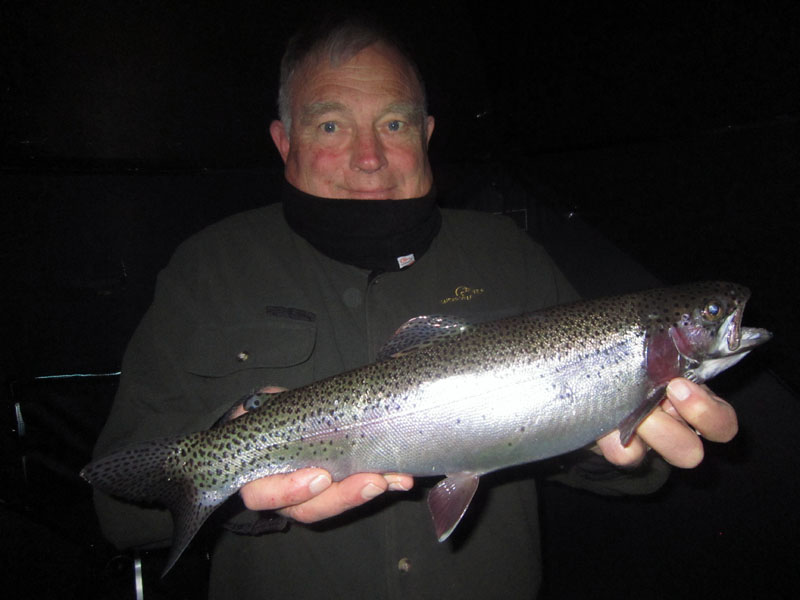 Antero’s ice is 6-12 inches thick with 6-10 inches of powder snow on top!  This snow has made towing sleds very difficult, although there are several hard packed trails stemming from each major parking area.  There are also some patches of slush showing up.  Fishing remains good to excellent on all of the typical baits, with fish changing color preference daily.  Today I had three first time ice-fisher-people and they caught on very quickly landing close to thirty fish!  They kept their limit for the smoker and plan on joining Colorado’s fast-growing ice fishing population!  Good job guys! 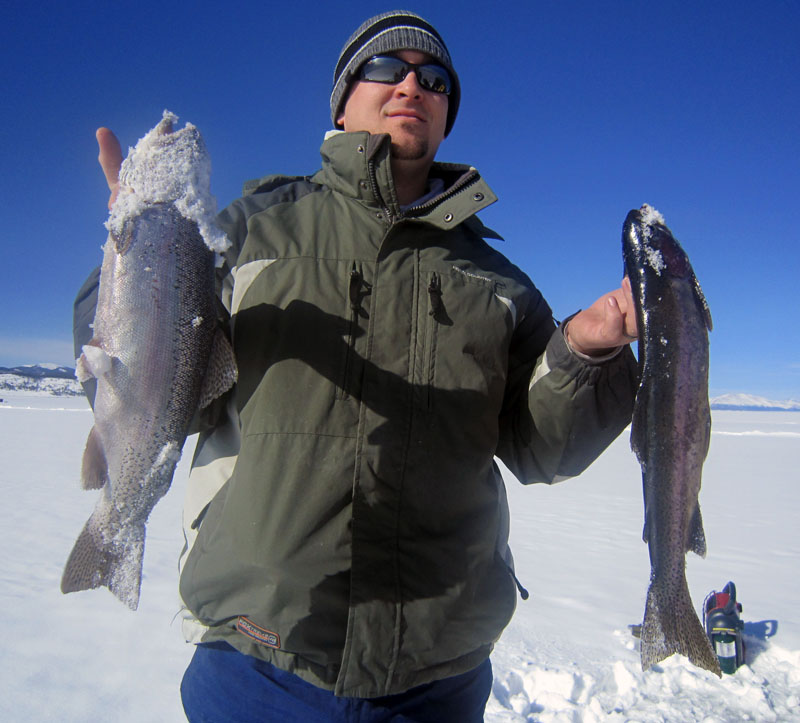 Antero now has 4-9 inches of safe ice across all of the lake.  There are a few unsafe pressure ridges to be careful of, but cold overnight temps and a thin layer of snow have helped the ice thicken up.  Fishing is good, but you have to find the feeding lanes!  I can’t stress this enough.  I scouted several of last years spots (weed edges) and have found that Antero is a totally different lake this year with more large weed beds and the lake being 2′ low.  Some of my waypoints were still existing weed edges, but contained very little fish activity, while others were what we call “honey holes” with a lot of fish activity!  Yesterday I had Glendale Raptors Women’s Rugby Head Coach Lisa Rosen and USA Rugby National Team member Stacy Baker out on the ice and they putt a hurting on the trout catching 25 fish and having several others come off in the hole!  If action slows, keep hunting for a fish highway! 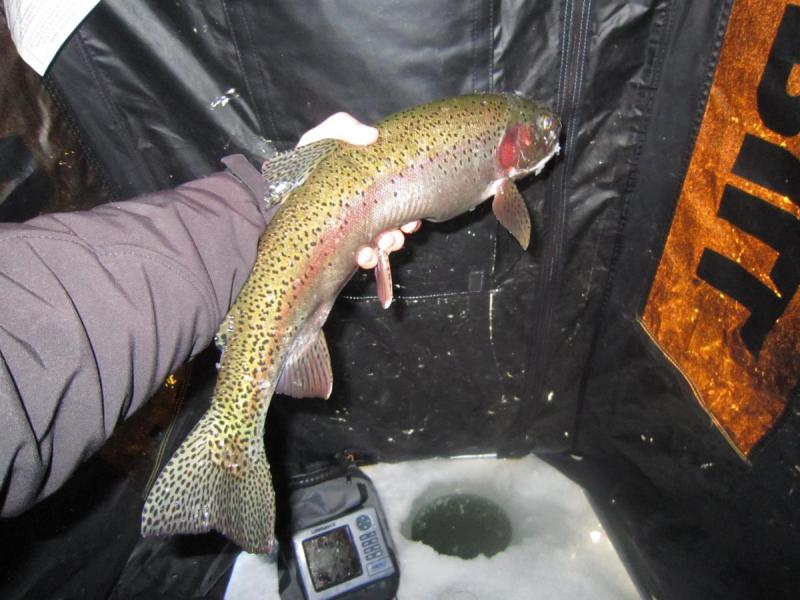 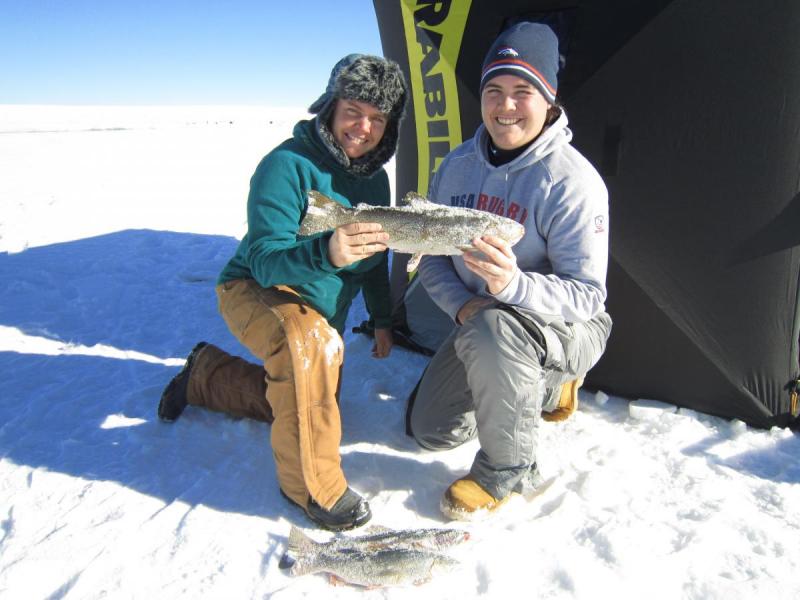 Antero has safe ice on both sides of the reservoir, but there is still a lot of unfrozen or sketchy areas.  The north side has 3-7 inches in areas and the south side has 3-5 inches.  Fishing is good for numbers of trout, kokanee salmon, and the occasional splake or sucker.  Typical trout baits tipped with a meal worm or wax worm are producing!  Be safe and don’t fish alone! 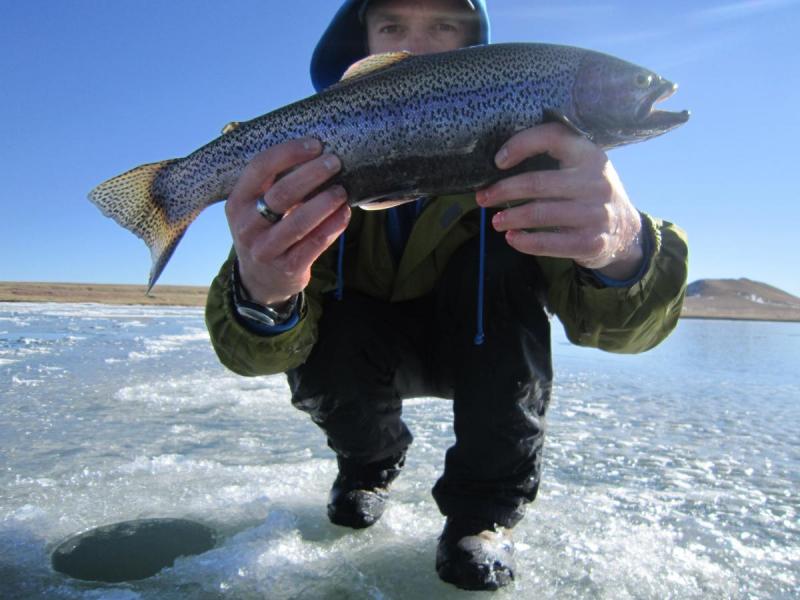 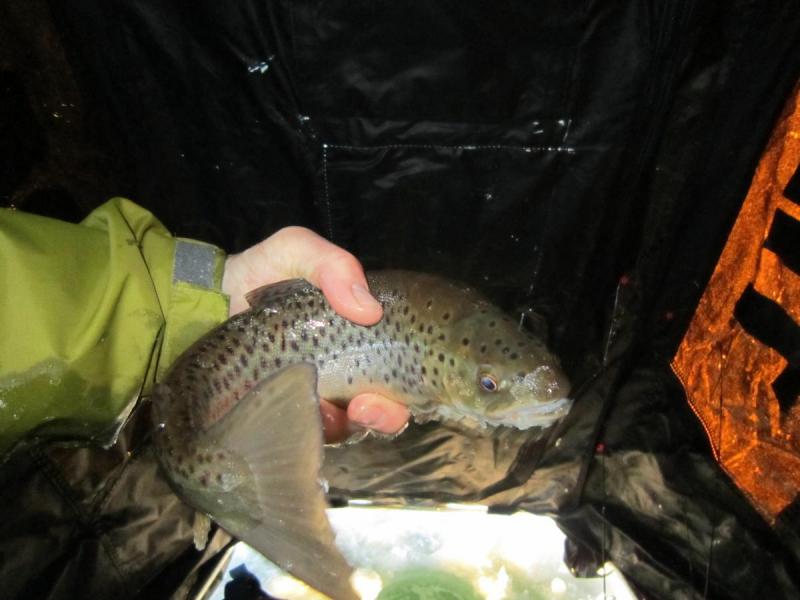 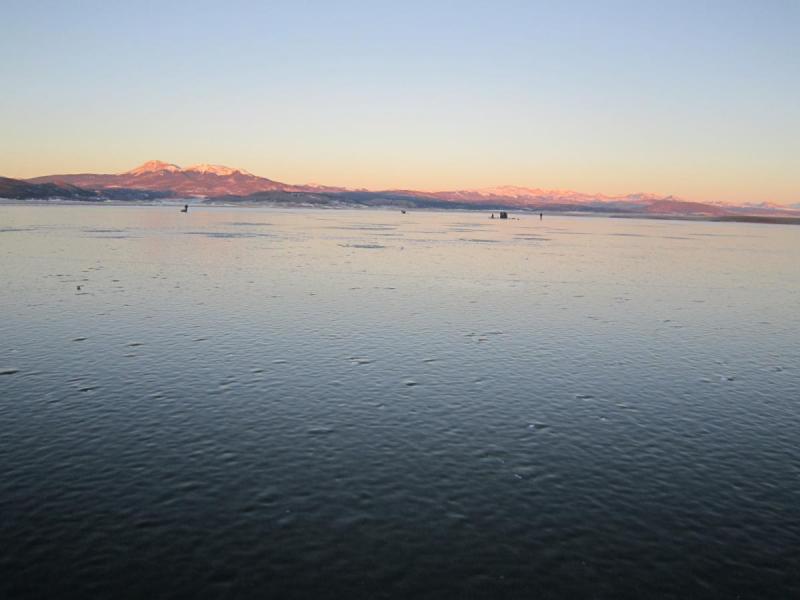